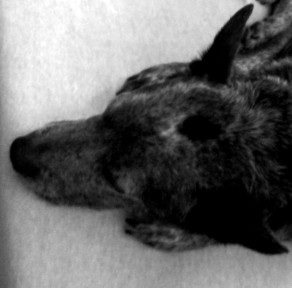 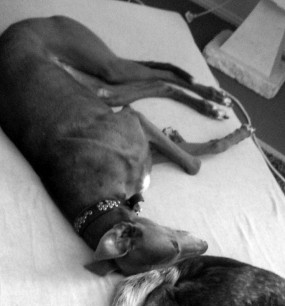 Snorting’s and snuffling’s around the table legs, as Kobash scavenges for any crumbs he can find from last nights dinner that may have dropped to the floor. A sneeze as he finds more dust than crumbs. He gives up after finding nothing more than a speck or two, then heads back to the mattress on the floor and lies down next to his beloved Nova. I don’t know whether or not his food issues will ever completely go away. But we’re doing everything we can to make it less of an issue for him. The feedings at the same time (or close too) every night. More affection than treats. Little things like these are making a big difference. Another thing we need to do is get back into a regular routine of walking. It has slipped back a lot over the last few months, what with the downward slope that ive been in and the pain in my back. Which is “normal” in my life. I get my ups and downs. This down is harder than usual i’ll admit. The hyper sensitivities that have been plaguing me for the last few months aren’t making it easy. But Kobash helps me as much as he can in his way, while I try to help to him with his food obsession. We’re a team. And Nova is our side kick 🙂 Oh, and we cant forget AsperBoy. While I try to work through my sensory issues, I also work at helping AsperBoy with his. As he gets older they become more and more apparent. I still remember the first time he made his strong dislike for having wet shoes and socks and pants known, after we got caught out in a down pour at the Dog park one day while with the pack of Dogs I used to walk. Once he became saturated from the waist down, he stopped and refused to walk any further, having a complete and total melt down right there on the foot path. He could not handle the feel of the wet jeans or socks or shoes on him. I don’t blame him. Its one of things I cant handle sensory wise either. As I learn more about mine, I notice more about his. In that way I can help him. While there is still so much more for people to learn about ASD/Autism, we are still galaxies ahead of where were when I was diagnosed back in the 80’s when nothing was known. And mothers were the ones predominantly blamed for their children’s condition. If only they had shown them more love. What ever. I promised my Boy that I would do everything I could to make sure that he wouldn’t have to go through the sorts of things that I did when I was at school. I think I’ve succeeded. He has so much help from the school and support services. His talents are known and encouraged. If he cant figure out something one way, they try another. He has friends. There are so many more resources now too.
Gentle snoring as Kobash drifts further into sleep. A stretch from Nova.
I like our quiet times together. I’m finding that I’m preferring more and more to stay at home. I’m definitely in a funk. I know that while these stagnant periods can go on for quite sometime, I will crawl my way out of it soon. So much as happened over the past year, and I think my brain is still processing a lot of it. All the changes. And there have been a lot. And all practically at once. And with my Aspergian mind, it takes time to sort through it all. And accept that things are different now, and wont be the same as they were. A lot of it is for the better. Some I struggle with. AsperBoy has endured all this with more strength than I thought he had. He can be very resilient. We try to keep things as routine as possible for him at home, even with little things. Structure. He thrives on that. The time he spends at his fathers sends it all skyward like ash from an erupting volcano. And that is the magnitude of some of his melt downs when he is home after an over nighter there. I just hope that it will be sooner rather than later that his father will finally accept his sons diagnosis (and make the necessary adjustments). And see that it doesn’t mean that there is something wrong with him. But that his differences are what make him unique and special. What would the world of science be today without Aspergians like Einstein and Tesla? And AsperBoy’s wish to be an entomologist. But then AsperBoy has desires to be a multitude of things. A musician. An Entomologist. An artist. A rock star. An inventor. His imagination is limitless.
But that’s my Boy 🙂
The frames for the Irlen lenses that took so long to get, will finally be sent off to get the Irlen tinting done this week. Next it will be AsperBoy’s turn. Now all I need is a remote with a mute button for the lorikeets outside. Sigh. Or maybe I can train Kobash to chase them away for me? I look down at him curled up in a ball on the Mattress. Eyelids flickering in Doggy dreams. His tail is resting over Nova’s face. While she is more out stretched. One long front leg gracefully linked through the other. Life as a Dog sometimes seems to be preferable does it not? Maybe sometimes. A single Nano-second of time perhaps. But even with the troubles that can plague us, I still prefer to be as I am. I know that the future is going to be bright and glorious. I hold onto that.
But for now the quite. For now.