Been a long time since I wrote anything. Last year was a massive year for us. Seems we spent most of it at family court getting stuff sorted out. It was my plan to home school my Asperboy for high school as he was falling through the cracks at school. His anxiety was way up, his melt downs, the bullying. He wasn’t keeping up with the class. And that wasn’t for the lack of him being intelligent enough to keep up. But the class room environment wasn’t a good place for him to be able to.
Unfortunately Asperboy’s dad didn’t agree. He wanted him to go to mainstream school. So this was one of the issues brought up in court. The judge had gave me a month to get all the evidence together in support of home ed and submitted. I got everything I could find minus the kitchen sink. Letters from psychologists, reports from school, information about home ed and its benefits over mainstream, also proof that I was more than capable of carrying it all out and providing my son with a balanced education.

Of course once I had done all the work, Asperboys father changed his mind. He wasn’t against us doing home ed anymore. I think he finally saw how much it meant to my son to be able to do it.

Once Asperboy found out he was able to be home schooled he visibly relaxed. He still had trouble at school and wanted to come home early every day, but he something to hang on to, to keep going. After school let out and he was graduated from primary school, all the build up of anxiety, the bullying, the melt downs and stress finally came out and he came down with a sinus infection that was so bad he almost ended up in hospital. Took him about a month to completely recover. 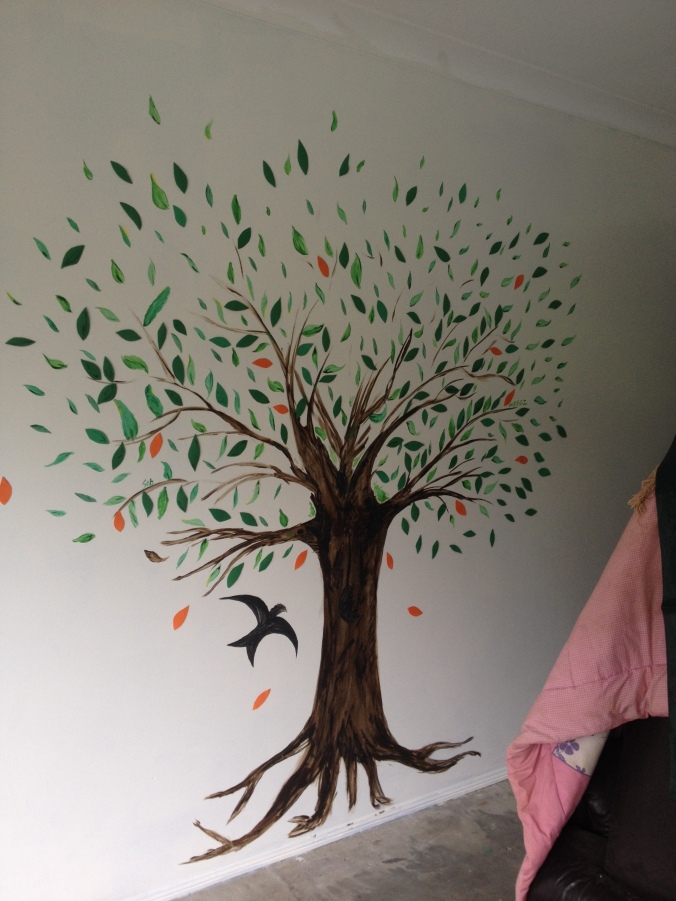 Tree Asperboy painted for our classroom

But we started this year off fresh. So far homeschool/unschool has been amazing. Its so rewarding. The amount of stuff that we’ve covered would take a teacher in mainstream half the year to accomplish. Some days he will binge watch the scishow on youtube. You’ll think, he can’t be learning much from that can he? But days later he will give me a lecture on how red giant became a red giant and what happens when it goes supernova. He will launch into a monologue with anyone about the peacock spider. He’s finally learning in a way works for him and its amazing watching him grow into it.
I can’t wait till next term and what comes next.